All-optical switch is the fundamental building block of optical communications, optical computing, as well as quantum information. An innovative approach utilizing the far field characteristics of topologically protected bounded states in the continuum is able to break the long-standing trade-off between ultrashort switching time and ultralow energy consumption. The advance could lead to an efficient ultrafast all-optical switch, and eventually revolutionize the all-optical computing.

All-optical switch is a kind of device that controls light by light, which is the fundamental building block of modern optical communications and information processing. Creating an efficient, ultrafast, and compact all-optical switch has been recognized as the key step for the developments of next-generation optical and quantum computing. In principle, photons don’t interact one another directly in the low power linear regime, and a cavity is usually needed to resonantly enhance the field of control light and increase the interaction. In early works, the performances of all-optical switches have been improved rapidly by optimizing resonators such as microrings or photonic crystals. For further improvements, the research area reaches the limit — the trade-off between ultralow energy consumption and ultrashort switching time.

“Low energy consumption usually requires high Q factor of resonator, whereas the longer lifetime high-Q mode imposes an obstacle for improving the switching speed,” said Qinghai Song from Harbin Institute of Technology, China. “An alternative approach with plasmonic nanostructure has been recently exploited to break the trade-off. The inserting and propagating loss is as large as 19 dB and additional power consumption is required to amplify the signals.”

Next step of this research is to cascadedly integrate several such switchable microlasers with an integrated photonic chip and to perform optical logic operations. This is the prerequisite for the ultimate goal — the optical computing or quantum computing.

The conventional ultrafast all-optical switches either utilize the nonlinear refractive index or the nonlinear absorption to produce an optical bit. Such techniques require either high excitation fluence to produce wavelength shift or extra loss to modulate the transmission, still limited by the trade-off.

The researchers solve this problem with the optical characteristics of BICs, which is initially proposed by Von Neumann and Wigner in quantum mechanics and has been revisited in optics recently. Although the accidental BICs has attracted most research attention due to its robustness, this research focus on the laser emissions from the symmetry protected BICs. Compared with the accidental BICs, the latter one is extremely sensitive to symmetry-breaking perturbations. The exceptional gain of a lasing system, corresponding to the imaginary part of refractive index (n”), can be a new and effectively parameter to ultrafast control the symmetry and the corresponding symmetry-related far-field laser emissions at the BICs.

To test the concept, the researchers fabricated a square lattice periodic nanostructure in a MAPbBr3 perovskite film and optically pumped it. Single-mode laser operation has been achieved at the symmetry protected BICs. The output laser beam is a donut beam in the vertical direction with a divergence angle of 2o. The polarization test and self-interference pattern show the emission laser beam is radially polarized with orbital angular momentum (OAM).

“The directional laser emission with OAM is not surprising,” said Song. “It has been observed and explained by B. Kante from UC Berkeley. It relates to the polarization vortex at the BICs and the transverse spin angular momentum induced by the real samples. It can also be realized with circularly polarized optical excitation. Comparably, the BIC microlaser is more intriguing in the all-optical switching.”

The researchers show that the pumping profile can effectively control the BIC lasers. By partially increasing the optical gain with the second beam, the four-fold rotational symmetry is broken and the BIC laser degrades to conventional photonic crystal lasers. As a result, the donut beam transits to two linearly polarized lobes. Such kind of transition and the vice versa happen in a time of 1-1.5 ps. A complete transition from a donut to two lobes and back to a donut has also been realized within 2-3 ps. Such kind of switching time is more than an order of magnitude faster than the BIC microlaser lifetime, clearly demonstrating that the limitation of laser lifetime on switching time is broken.

“Such an ultrafast control is attributed to the far-field characteristics of BICs,” said Song. “The BICs are formed by destructive interference at the radiation channels. Considering the far field radiation, the transition from BIC microlasers to conventional lasers represents a re-distribution of the laser emission instead of a direct switching on/off of the lasing mode.”

The laser threshold is about 4.2 mW/cm2, giving an energy consumption per bit similar to current all-optical switches. “This is because the quality of our perovskite nanostructures is low and the ultrahigh Q factor of BICs has not been fully utilized,” said Song. “Eventually, the threshold can be further reduced by orders of magnitude with the BICs and break all the limitations of all-optical switches.”

The demonstrated mechanism is not limited by optical excitation. The electrical driven BIC microlasers with ultrafast switching is also possible and the cascadedly on-chip integration of such ultrafast switchable BIC lasers is also essential for optical and quantum computing. 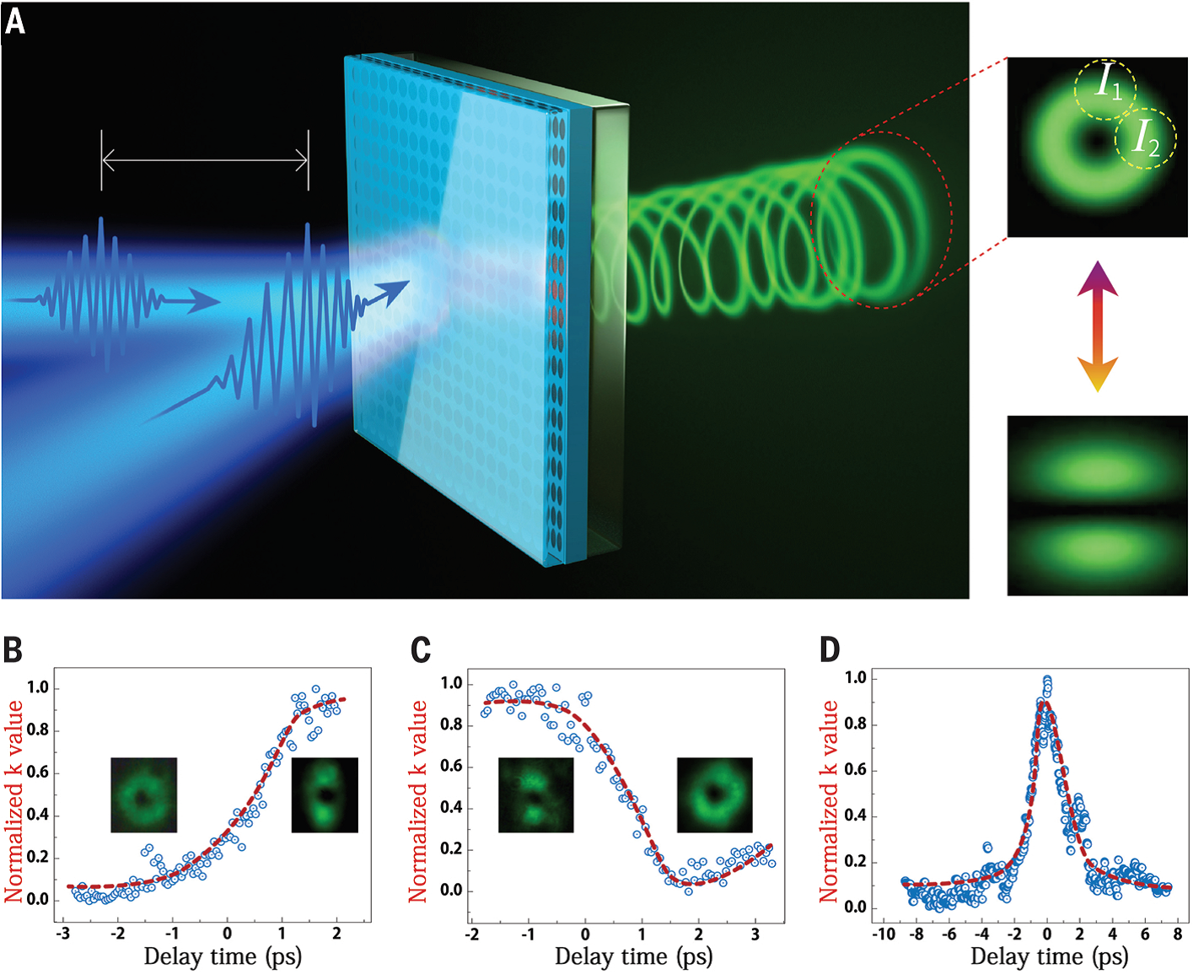 Figure 1: Ultrafast control of the quasi-BIC microlasers. (A) Schematic of two-beam pumping experiment. Two beams are spatially detuned with a distance d < 2R, being shifted temporally with a delay time τ. The insets show the far-field emission patterns from the perovskite metasurface under both symmetric and asymmetric excitations. (B) Transition from a BIC microlaser to a linearly-polarized laser. I1,2 are the intensities at the marked regions in the insert to (A). Insets show the corresponding beam profiles. (C) Reverse process of (B). (D) Transition from a donut beam to two-lobe beam and back within a few picoseconds. Red curves are guiding lines for the calculation of the transition time.